Can Chocolate Help You Think Better?

Despite an amazing weekend with temperatures in the high 60’s which is not normal for southern New Hampshire, it seems that winter is not gone yet. As I look out my window snowflakes are falling lightly. And it’s beautiful. A big part of what makes it appealing is that there is no snow on the ground! And none of this is sticking, either.

It looks like we are headed for more seasonal weather over the next little bit which will help the maple syrup farmers. Usually the first day of spring in this neck of the woods, never means real spring is here. Seems this year might be different!

The Benefits of Chocolate

I know! I should have talked about this last month for Valentine’s day! But the truth is that chocolate can be really good for you.

It’s the cocoa that has the health benefits. The higher the percentage of cocoa the better. The good news is it’s rich so you don’t need a lot. If you eat quality dark chocolate with a high cocoa content, then it is actually very nutritious. It contains a decent amount of soluble fiber and is 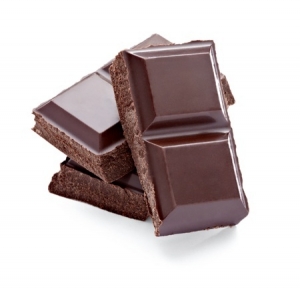 loaded with minerals. A 100-gram bar of dark chocolate with 70-85% cocoa contains (1): 11 grams of fiber and high amounts of iron, magnesium, copper and manganese. Cocoa is also one of the best sources of antioxidants available on the planet.

Now, a 100-gram bar is about 600 calories, so you don’t want to be eating that every day! But a small amount daily is good for you. 15 grams or half an ounce is a more sensible serving and will net you about 90 calories.

1. The flavonols in chocolate cause the endothelial lining in your arteries to produce nitric oxide which relaxes the arteries. There are many controlled trials that show that chocolate has an effective although mild effect on blood flow and blood pressure. It is worth noting that the EU Commission recently approved a health claim that 200 milligrams of cocoa flavanols can ‘help maintain the elasticity of blood vessels, which contributes to normal blood flow.’ This dose is equivalent to 2.5 grams (1 ¾ Tbsp.) high-flavanol cocoa powder or 10 grams of high-flavanol dark chocolate (about one-fifth of a regular size chocolate bar).

2. Dark chocolate raises the “good cholesterol” (HDL) and protects against the “bad cholesterol” (LDL). This is likely largely due to the antioxidant power of cocoa but the bottom line is that it is good for your heart.

4. Recent data presented at the annual meeting of the American Association for the Advancement of Science (AAAS) indicates that cocoa flavonols might improve blood vessel function in the brain. Researchers also demonstrated that cocoa increased blood flow to specific areas of the brain.

5. Cocoa flavonols have also recently been linked to improved thinking. In an Italian study which was published in the American Journal of Clinical Nutrition, 3 separate groups of people aged 61 to 85 were studied. The first group consumed only 48 mgs. of cocoa flavonols while the second group drank a medium amount (522 mgs.) and the third group consumed a high amount (933 mgs.) After 8 weeks, people who consumed the medium and high amounts showed significant improvement on tests that measured attention, memory and executive function.

With those benefits who wouldn’t want to consume chocolate regularly? The trick is avoiding the calories that usually accompany the chocolate in the form of fat and sugar. You really need to watch your portion. If this is a challenge for you, unprocessed cocoa is a great way to go because it contains minimal fat and zero sugar. Processing cocoa, also known as Dutch process, reduces the flavonol content. So stick with natural cocoa which can taste bitter if consumed by itself.

It tastes delicious, though, if you add it to a protein smoothie made with protein powder sweetened with stevia or xylitol and some fruit. Or you can make a hot chocolate with some warm milk and stevia. If dairy is a problem for you just use almond or coconut milk as an alternative to cow’s milk.

Other ways to increase your cocoa intake include adding it to your morning oatmeal with some cinnamon, adding it to your morning coffee to create a mocha flavor, try it in chili (see recipe) or swirl it into a plain Greek yogurt for an interesting turn on a healthy snack. You can create a rub for pork tenderloin with cocoa, onion and garlic powder, cinnamon, allspice and ginger or with fennel, cinnamon and cayenne (see recipe).

Recipes of the Month

A Hearty and Delicious Chocolate Chili

Get a FREE copy of
Reboot Your Hormones to Increase Energy and Burn Fat.