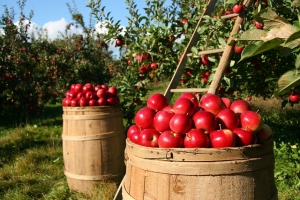 As the apple harvest moves into high gear, let’s take a look of the benefits of this seasonal food which is in abundant supply right now. Apples are a great source of antioxidants, flavonoids and fiber and have been praised as one of the top 10 healthy foods.

Get a FREE copy of
Reboot Your Hormones to Increase Energy and Burn Fat.